Montecore was the seven-year-old white Bengal tiger that mauled Roy Horn, of Siegfried and Roy, onstage in Las Vegas, Nevada, on October 3, 2003. Montecore died over ten years later, "after a short illness", on March 19, 2014. He is now FREE.

Montecore brought our attention to our need to listen to the animals...

There are freak shows, and then there are FREAK shows.

FREE MONTECORE is a plea to free all animals from the expectations of human behavior. How can anyone be surprised that a tiger--even a "domesticated," inbred one-- would act like a tiger?

FREE MONTECORE and his animal kind from the stage. There is nothing natural about forcing exotic animals to perform in a Vegas show. Humans have the choice to go to Las Vegas and exploit themselves, but animals such as Montecore, the then-seven-year-old white Bengal tiger that mauled Roy Horn onstage on October 3, 2003, have/had no choice. Vegas has all the "wild animals" (of the human variety) it needs. Stop the show!

FREE MONTECORE from misrepresentation. There is nothing magical about marketing white tigers as an endangered species in order to trick conservationists and rake in the dough. Siegfried and Roy have "mastered the impossible" in that they have bred these animals for recessive genes, producing numerous congenital defects.

In a letter to Siegfried and Roy, dated October 6, 2003, PETA Vice President Dan Mathews wrote, "...No matter how much you say that you love the wild animals whom you have confined continents away from their natural homes, you are still the men who have subjugated their wills and natures to further your own careers."

FREE MONTECORE is a call to action. To end all exploitation and genetic manipulation of exotic animals for the entertainment and monetary gain of man. To end the abuse of such animals. To respect wild animals AS wild animals. Montecore's legacy will live on--and subsequent animal attacks only intensify the need to stop this nonsense.

Show your support of MONTECORE and animals like him.

Show your support of animal rights. 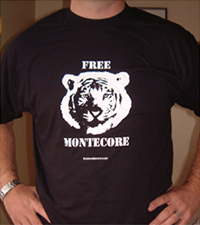 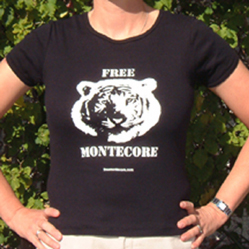 ALL PROFITS from the sale of these t-shirts will be donated to the World Wildlife Fund's Save Tigers Now program or a similar conservation-oriented charity. Help protect the planet's existing Bengal tiger population in the wild.